Perhaps Portugal’s greatest achievement was that they did it without their key man, that they had the team spirit and the organisation to overcome the loss of a player who had been central to everything they had done in the tournament to that point. But enough about the semi-final – at least William Carvalho was back from suspension for the final.

The theory is that Cristiano Ronaldo has decided to keep playing till at least the next World Cup, by which time he will be 33, partly because he is in excellent physical shape himself but also because he looks at the midfield quartet that provided a platform for him and sees four players aged 24 or under of considerable discipline and talent.

At the heart of them is William Carvalho. His is an ungainly sort of footballer, all telescoping limbs and hunched shoulders, but his effectiveness cannot be denied. For years, it seemed, he has been linked with Arsenal, the final part of the jigsaw to link together their disparate midfield creators. And for just as long, wherever he turned up in the Champions League playing for Sporting against high-class opponents, he looked thoroughly ordinary.

There was an emperor’s new clothes vibe to him, a dawning sense that maybe he wasn’t that good, that he was a player of the social media age, overhyped too soon and vociferously promoted by thousands who’d never seen him play. The scepticism was not unjustified but what was perhaps forgotten was just how young he was - young enough in fact, to give further material to the doubters by missing the decisive penalty in the shoot-out at the European Under-21 championship final last year. 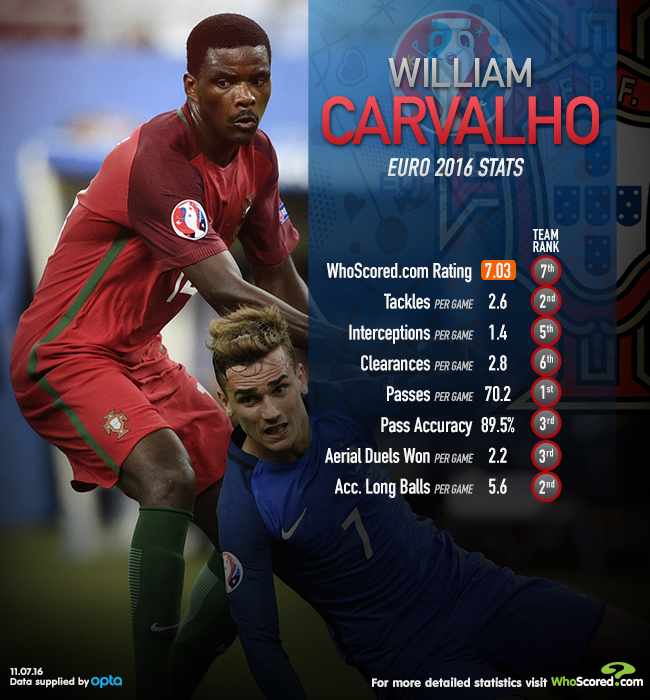 But in France, William Carvalho blossomed. Those long, long limbs kept making tackles. Fifteen times opponents tried to go past him; on 13 occasions he thwarted them. He also made seven interceptions and blocked two crosses and two passes. At least as important was his positional sense, something that is hard to measure with statistics, operating as a breakwater in front of the back four. If opponents did break through Portugal’s pack of three tough-tackling aggressive midfielders, there was Carvalho extending a leg to pinch the ball away. And if they somehow got past him, there were still four defenders. Fernando Santos, the Portugal (cliquem, caso tenham cusriosidade em ver os ratings de cada jogador) coach, said he would rather be ugly and still in the tournament than pretty and at home and William Carvalho was the embodiment of that spirit.

Yet to think of him as just a destroyer would be inaccurate. He completed 28 of 37 attempted long passes and 260 of 287 short ones. He kept the ball moving. He was a facilitator, a lubricator, not flashy but effective. All seven of the free-kicks he took found their target. But among all that there was just one key pass. Creation wasn’t his job. He was there to plug gaps, win the ball and move it on to others.

There will be those who criticise Portugal for their pragmatism and it's true that there seems something amiss when a side can win the tournament having won one and drawn six games in normal time. But those are the rules and the regulations as they stand. Despite the whining every time England fail to skip round opponents like Brazil 82 or Hungary 54, international football is about not losing. It’s not about style it’s about substance. Portugal may, for the neutral, be the least watchable tournament winners in a generation, but that’s what the international game is.

If you don’t concede, you don’t lose, and Portugal leaked only one goal in 420 minutes of knockout football. It’s not thrilling but it is effective, and William Carvalho stood at the heart of that.