And the best is...Cristiano Ronaldo! 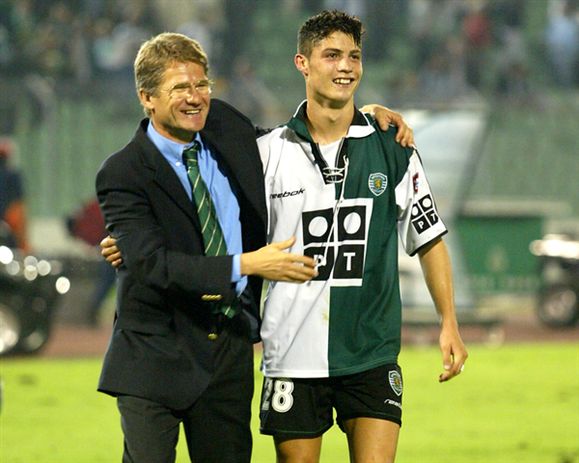 FIFA.com: You have coached many talented players during your years in management, and not least Cristiano Ronaldo. Did you notice immediately that he had something special?
Laszlo Boloni: I'd only seen him once, in a friendly between the club's U-16s and U-18s, and I decided straight away that I'd bring him under my wing as soon as I could. That moment came when Portugal faced a pair of matches and I had to fill out my squad with youngsters to make up for all the internationals who'd left. I called up this young 16-year-old boy, but I never imagined I'd be keeping him long term. However, as soon as I saw his first training session, I decided there and then not to let him leave.

Do you recall how the conversation went when you told him he was staying with the first-team squad?
At the time, I was only just starting to speak a little Portuguese, and I don't remember if I needed a translator or not for our conversation. But it wasn't too difficult talking to him. I didn't need to say much: he had a big smile and was proud to be training with the pros. I simply told the technical director, Carlos Freitas, that I was keeping him. He looked at me and asked: "Definitively? Do you know he can't play in the league?" I didn't know, but I said yes, so that he could train and play friendly matches with us.

As his first coach, what were you able to bring to his game? What was your role in his success?
The first thing is that I was a little strict. There's an expression I like to use which goes: "I prefer to kiss my children when they're sleeping." I'm quite strict when they're around, but I kiss them when they're not looking. I was the same with Cristiano. I was quite strict and, because of that, the first message he began to understand was to not overdo things and not just put on a show. The end result is what mattered most, despite all his qualities. Sometimes a little sprint is all it takes, and you don't need five, six or seven stepovers. I made him aware of his responsibilities and taught him a way of playing that's more effective than dribbling the ball.

Was he already the same type of player he is today, with the same qualities?
He played as a centre-forward at the time, but I moved him out to the wing because coming up against two 90kg centre-backs would have been a little too much for a boy of 16 or 17. Plus he was better able to exploit his qualities out wide, without losing his effectiveness. To my huge satisfaction, Alex Ferguson did the same thing when Cristiano joined Manchester United. Today, he's free to go where he wants, but at the time I felt that changing his position was the best thing to do. As he was too young, and the rules prevented him from playing with the first team, we organised a special bodybuilding and fast-twitch-muscle programme to help him stay strong in duels and – to borrow a phrase from Aime Jacquet – "beef up his game". He understood that what's important isn't just the technical prowess that the Portuguese love so much and over-emphasise sometimes. By giving him his start in the professional league, I was able to introduce him to some great players, and that helped his development.

After all the trophies he has won and the four Ballon d'Or titles, do you think you deserve more recognition?
Perhaps, but I don't expect anything from him or any of my players. I was a player too and I know you need to have an innate selfishness, especially when you're a forward. I understand that very well. I don't expect any recognition, and I've already been very well rewarded. My name sometimes gets mentioned with his, and he invited me to a Ballon d'Or ceremony, where his mother and family expressed their thanks. So I've already received a lot.

In the debate over who is better between Ronaldo and Lionel Messi, do you naturally favour Ronaldo or do you try to be objective?
Obviously, I can't be 100 per cent objective, but both are phenomenal players – the likes of which have rarely existed. Perhaps [Diego] Maradona, Pele, [Johan] Cruyff, [Ferenc] Puskas and [Alfredo] Di Stefano were at the same level, but not many. Ten at most. Messi is unique in the way he plays, and so is Ronaldo. My heart naturally leans towards Ronaldo, but I have the greatest respect for Messi.

Would you like to coach Ronaldo again one day?
No, for the simple reason that it's absolutely certain I'll never coach Real Madrid one day. And I hope that Ronaldo never decides towards the end of his career to drop back down to a level he hasn't played at for a very, very long time – a level which, with no disrespect to any teams, could only cause him harm. I think he should, and will, finish his career at Real Madrid.